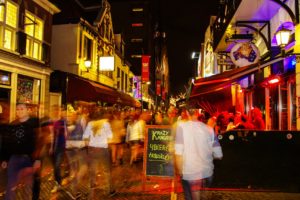 At a thought-provoking talk at Dutch Design Week 2017, security experts said that light and scent can be used to influence people’s mood and behavior so that there is less violence, including terrorism.

Tinus Kanters, project manager at the Dutch Institute for Technology, Safety and Security is part of a project to improve public safety in Stratumseind, a 250-metre-long street lined with bars and clubs in Eindhoven, Netherlands. LED lights mounted along the street can be varied in color and intensity, whenever unusual activity picked up by sensors indicates that aggression or violence is imminent.

Kanters thinks scent will be an even more powerful tool to keep visitors safe. The group did research where people who were arrested were brought into a room scented with an orange fragrance. Prisoners in the scented room exhibited a less agitated mood and had less need of sedation.

Although this public safety initiative is still being implemented, you can get similar positive mood effects in your home or business today. Talk to your Air Esscentials rep to find out which fragrances stimulate relaxation, alertness and a whole range of other moods.

Want Exclusive Blogging Tips?
Join My Newsletter
Join over 30,000 marketers who get tips on improving their blogging, delivered directly to their inbox.
Give it a try, you can unsubscribe anytime.
Send this to a friend