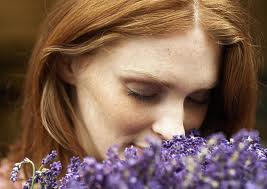 Think of everyone you know. Chances are, some of them are more tuned in to aromas and may have a better sense of smell than others. Maybe it’s you. Learn how to improve your sense of smell below.

Your Incredible Sense of Smell

Humans have an extraordinary sense of smell. People can follow the scent of chocolate up to 30 feet through a field. Mothers can identify their babies by scent alone within an hour of giving birth. We can detect three drops of ethyl mercaptan (the compound that creates the odor of gasoline) dripped into an Olympic-size swimming pool. In fact, scientists now agree that humans can detect trillions of odors, making scent our strongest sense. In comparison, we can see millions of colors and hear thousands of tones.

What Is It Like to Not Be Able to Smell?

Yet, many appreciate smell the least of their senses, perhaps because they have no concept of what it is like to live without smelling our surroundings. Individuals who are unable to smell are called anosmics. They experience a range of problems including a diminution in the sense of taste and enjoyment of food, reduced sex drive, a feeling of disconnectedness, depression and even suicide.

Your sense of smell can bring more enjoyment to your life. Smells can bring back happy memories from your childhood, make food taste better, improve your mood, relieve stress, up your athletic performance and even help you do better at complex tasks.

Can You Improve Your Sense of Smell?

Are your olfactory abilities (or lack thereof) inborn and can’t be changed? But, unless you have some medical condition that affects your sense of smell (such as Alzheimer’s, Parkinson’s or schizophrenia), you can train your nose to smell and identify smells better. Some people are biologically disposed to have a more acute sense of smell, such as people with olfactory synesthesia. People with this condition sense smells as colors or tastes.  Scientists have found that people with ADHD are able to detect and identify smells better than neurotypicals.

People living in indigenous, hunter-gatherer cultures tend of have a better sense of smell than Westerners. These societies also use many more words to describe smells than Western languages.

Learning How to Smell More

One method to help people smell better is simply to intentionally smell several odors on a daily basis. You can also sharpen your olfactors by doing a threshold test, where you try to detect a small amount of odor for three minutes, three times a day for two weeks. Even imagining odors can help improve your odor detection abilities. So the next time you sit down to a meal, take a moment and breathe deeply. Think about the aroma and try to identify the different fragrance notes. Repeat with anything you would like to be able to smell with more discrimination. After doing this regularly, you will have an improved sense of smell.

Start your training by choosing one of Air Esscentials’ small diffusers and a selection of different aromas. Your life will be more enjoyable with your enhanced olfactory abilities!