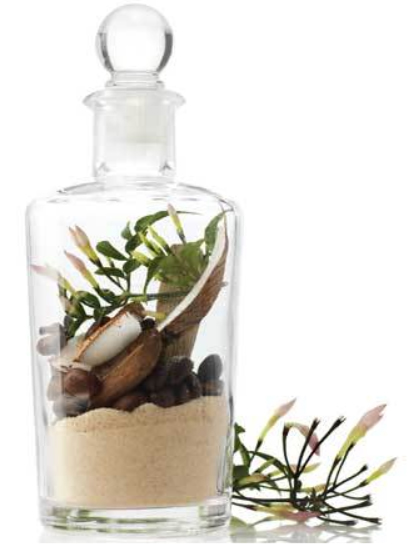 Close your eyes and think of Miami. What do you smell? That was the question on master perfumer Rene Morgenthaler’s mind when the Scent Marketing Institute tasked him with inventing a fragrance that encapsulates the spirit of Florida’s most cosmopolitan city. The cofounder of Smart Fragrances spent six months in his state-of-the-art fragrance laboratory, attempting to capture the city in a single spritz. Thirty trials later, many would argue the Swiss-born nose got it just right. “Miami is a melting pot of enchanting scents: jasmine, sun-baked sand, coffee, salty air, Cuban cigars, orange trees,” Morgenthaler says, reflecting on his past visits. “It’s an incredibly sensual, upbeat palette of ingredients.”

The result of his endeavors is Miami, acrisp, featherweight fragrance interlaced with jasmine, lavender, spices, and citrus, evoking seaside nonchalance. But Morgenthaler’s creation wasn’t initially intended for the wrists of consumers. Realizing its potential, the Greater Miami Convention & Visitors Bureau branded it as a luxurious air diffuser, designed to champion the city at last December’s ScentWorld Expo, held at the former Gansevoort hotel (now The Perry South Beach) in Miami Beach.

According to Dr. Alan Hirsch, neurological director of the Smell & Taste Treatment and Research Foundation, vacation spots such as Miami are a medley of feel-good ingredients. “We looked at what made people recall their past vacations in a positive light,” Dr. Hirsch says, “and the number-one odor people described was suntan lotion—that coconut, vanilla-type smell—which inspired a happy nostalgia.”

In tropical climates like ours, a memorable fragrance isn’t just about finding the right notes. Heat and humidity play key roles in how we perceive them. “Fragrances really do wear better in moist cities simply because there’s more evaporation,” explains Carlos Huber, founder and nose of Arquiste. “The dewy air carries molecules better, so the scents are more saturated. This means men and women wearing fragrance in Miami are essentially walking around in a perfume cloud.”

If ourclimate amps up the effect of whatever we wear, perhaps it would be safer to avoid syrupy, spicy scents? Laure Hériard Dubreuil, CEO and founding partner of The Webster, says it’s not that simple. “Essentially the Miami woman is looking for two kinds of fragrances,” she says. “First, it’s that very light and fresh spritz, as the weather is so hot and humid. But she also wants a stronger, spicier scent at night.” This flip side to our fragrance wardrobe may stem from the city’s vibrant nightlife, but also its Hispanic ties. “I think that connection is very influential in the Miami market,” says Jessica Hanson, director of fragrances at Sephora. “The Latin heritage of Paco Rabanne from Spain and Carolina Herrera from Venezuela really resonates with our Floridian customers.” And it’s not just women indulging in perfume therapy—far from it. Hanson describes Miami as “one of the highest-performing and fastest-growing men’s fragrance markets in the United States.”

It seems that encapsulating a city as varied and nuanced as Miami is not as simple as just one bottle or one spritz. Fragrance preferences are so personal, based on a connection between our olfactory glands and our brain that’s as individual as our fingerprints. But whatever it is that makes you remember Miami—orange flowers, sunscreen, jasmine, espresso—the one constant is that every time you smell that particular note, it’ll bring you back here. Miami is available at Air Esscentials, 2801 Florida Ave., Miami, 305-446-1670